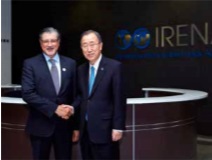 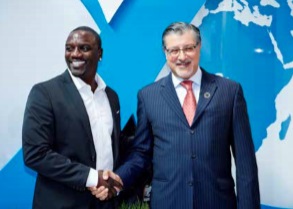 Lifetime Achievement Award for the Advancement of Renewable Energy

Mr. Adnan Z. Amin is the Director-General of the International Renewable Energy Agency (IRENA), currently serving his second term. He has over twenty-five years of experience and recognized accomplishments in the international arena, primarily in the fields of sustainable development, international energy, and environmental policy, as well as a solid track record in institutional and organizational development and management of international organizations. Mr. Amin joined IRENA in 2010 as the Interim Director-General of the Preparatory Commission. In April 2011, he was elected as the Agency’s first Director-General. During his tenure, IRENA has become the global authority on renewable energy and a vibrant international organization. The Agency today provides the world community with a strong international cooperation framework to accelerate sustainable energy transformation, as a major pathway to fostering sustainable development and one of the most important solutions to climate change. A key priority of Mr. Amin’s tenure at IRENA was to create an inclusive and agile Agency responsive to the needs of its Members. In only five years, IRENA membership almost tripled since he took office, growing to over 170 countries in 2015. His close cooperation with the United Nations (UN) and its entities resulted in IRENA being the acknowledged lead agency for climate action in renewable energy with concrete initiatives profiled in key events such as the UN Secretary-General’s Climate Summit and at CoP21 in Paris France. Under Mr. Amin’s leadership, IRENA was also selected as the hub for renewable energy within the Sustainable Energy for All Initiative, bringing together countries, the private sector and civil society to advance the objectives of the Initiative. Prior to joining IRENA, Mr. Amin served as Head of the UN System Chief Executives Board for Coordination (CEB) Secretariat, led the Secretariat for the UN Secretary-General’s High-level Panel on UN System-wide Coherence in the areas of Development, Humanitarian Assistance, and Environment, served as the Director of the New York office of United Nations Environment Program (UNEP) and Special Representative of the UNEP Executive Director. He was also a Trustee and member of the Board of Directors of the Cambridge, UK based World Conservation Monitoring Centre, which is considered one of the premier biodiversity information institutions in the world. Mr. Amin is a development economist specializing in sustainable development, and he is a national of Kenya.